Nové
Popis:
Global intellectual celebrity Bernard-Henri Lévy explains how his philosophy is shaped by the wisdom and beauty of Judaism and why the global resurgence of anti-Semitism poses an existential threat to us all. A world without Jews would not be a world. A world in which the Jews once again would become the scape goats for all people s fears and frustrations would be a world in which free people could not breathe easy. Today, anti-Semitism is on the rise in countries all around the world. This bigotry imperils millions of men, women and children. It is also a rejection of the glories of Judaism: the ideas of man and God, of history and time, of power, voice, light, liberty, revolt, memory and nature that have informed and enriched both Western and Eastern cultures for millennia. In his most personal book yet, Bernard-Henri Lévy reveals how his life has been shaped by his faith. It compelled him to become The Godfather of the Arab Spring, just as the realization that so many of our notions about history, the individual, and freedom of thought are fundamentally Jewish transformed his philosophy. This is a riveting, impassioned narrative from one of our foremost thinkers 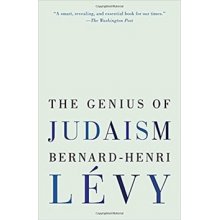