A chilling new thriller that gets into the heart and mind of the killer, and the victim . . .

Seventeen-year-old Tessa, dubbed a 'Black-Eyed Susan' by the media, became famous for being the only victim to survive the vicious attack of a serial killer. Her testimony helped to put a dangerous criminal behind bars - or so she thought.

Now, decades later the black-eyed susans planted outside Tessa's bedroom window seem to be a message from a killer who should be safely in prison . . . 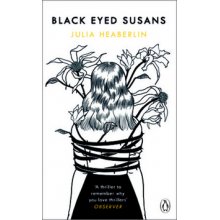